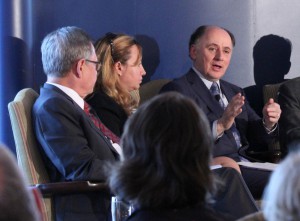 As an experienced moderator, David believes that most organizations – large and small, public and private — have the potential to develop and enhance their convening abilities. Further, he believes that the skills associated with convening, which are often underestimated in their importance, are now becoming essential competencies for future leaders.

In an age when partnerships and collaboration are increasingly required in order to move initiatives forward, the ability to effectively bring together diverse stakeholders, with a purpose, can make a significant difference to a project’s success.

David has provided training in the form of workshops, seminars and lectures on the art and science of convening. His new book on this subject serves as an indispensable guide for organizations aiming to develop their own convening capacities

The changing nature of philanthropy in recent years has prompted new approaches to traditional methods of fund development for most organizations. Donors, large and small, are seeking different forms of engagement with their beneficiaries – they’re wanting to understand and see the results of their donations (investments) in tangible ways.

David has been very successful in managing large, successful fundraising campaigns; however, he believes that these kinds of campaigns are now less effective for fund development than they are for profile-raising and branding.

Successful fundraising today often takes the form of partnerships and sponsorships as important elements in relationship-building. Some organizations may also wish to consider membership-based models as a foundation for sustainable fund development.

David has provided strategic consultations and workshops on fundraising in this new and often challenging environment.

It was once assumed that public policy was developed only within government; that’s not the case any longer. To be sure, we have many very smart and capable public servants who in the past were called upon more frequently to develop policy options for elected governments. Today, however, these internal sources are often under-utilized. Policy is now developed just as often elsewhere: by political staff, think tanks, universities, business associations, trade unions and other groups.

As a result, David believes that many organizations should consider further developing their own capacities to develop policy ideas and proposals. Where appropriate, this can be done on a collaborative basis, building partnerships with other stakeholders.

David has provided consultations and training on public policy and policy development with the objective of playing a helpful and constructive role with government leaders both at the elected level and within the public service.